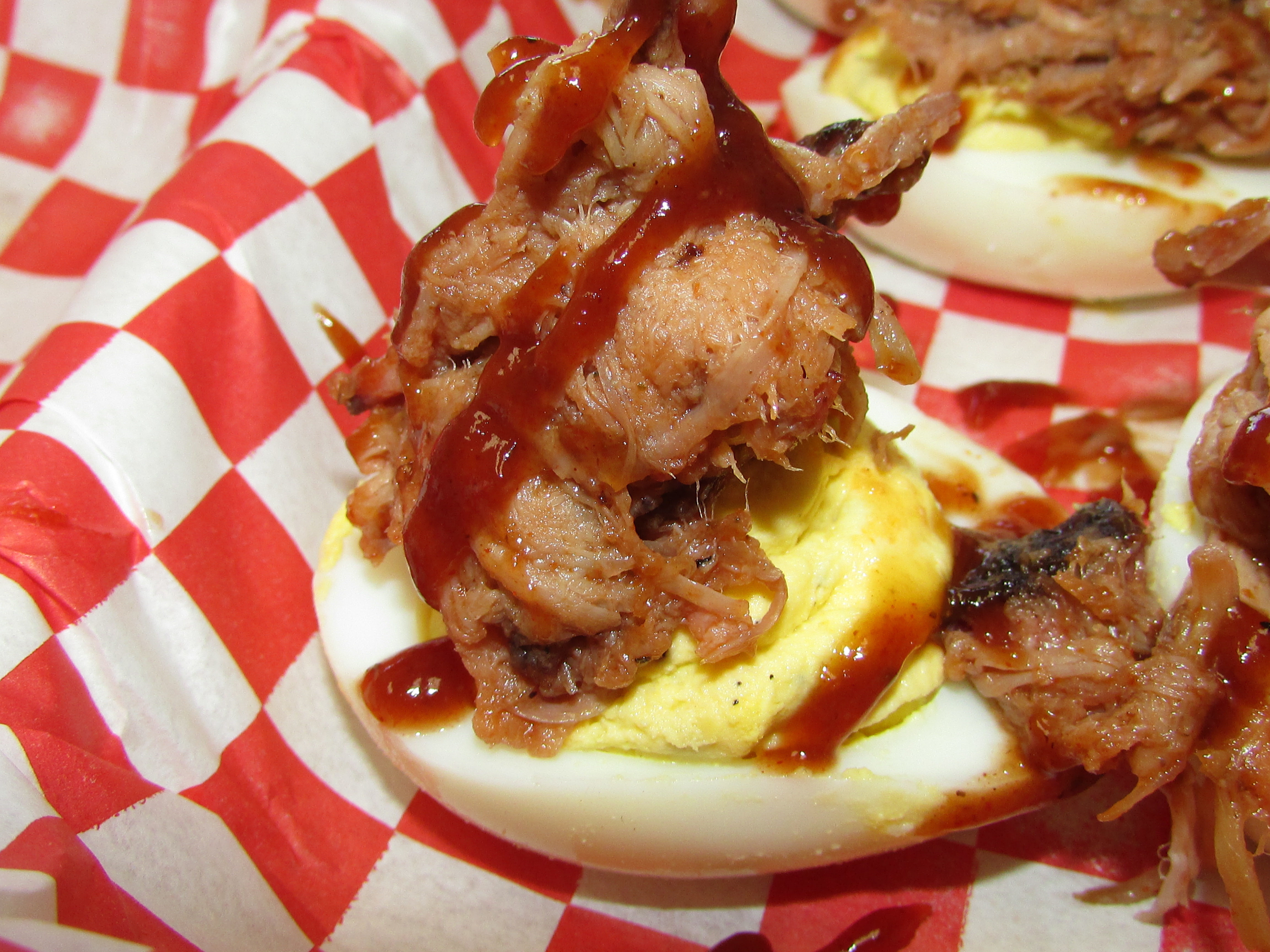 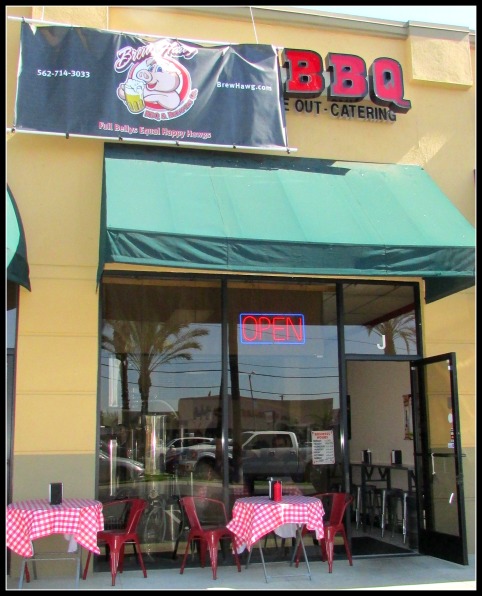 There’s a new BBQ place in Orange, CA and it’s called Brew Hawg. I absolutely LOVE BBQ so I was excited to dine at this place.  Brew Hawg opened it’s doors only about 2 months ago but the food and drink have been around for quite some time. Leo Martinez is the Owner, Pitmaster and Brewer behind this delicious storefront. Leo started out as software engineer but just wasn’t feelin’ it. He loved to BBQ and had several of his own recipes already so he got his business license and looked for a place to hang his hat. He found that place in the ever popular food truck business. Before long he had jumped from the food truck to his very own place! 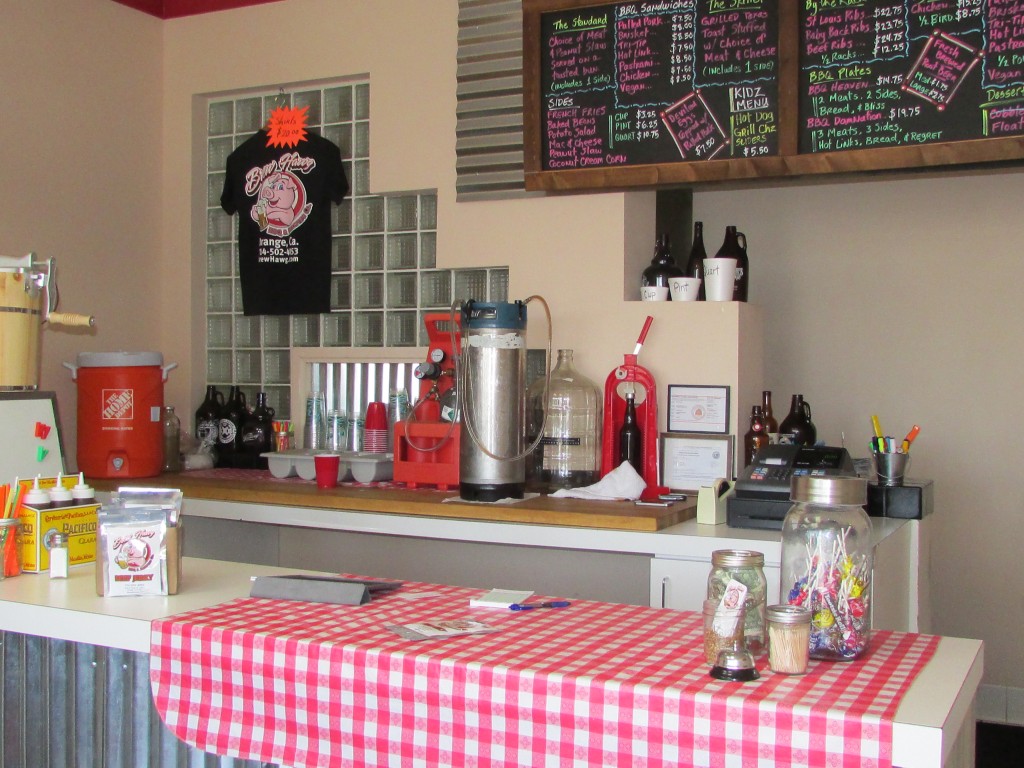 As I entered this counter service restaurant, I noticed how warm and friendly the atmosphere was. AND THE SMELL WAS AWESOME!! My mouth started watering immediately! The delicious smell was coming from two 200 pound smokers they have in the back.  They use Cherry and Pecan for the wood in the smoker and you can guarantee that there is always something in the smokers! Helping Leo come up with the menu is Chef Kelly Nielson. Kelly along with Leo create their mouth-watering menu which is evolving everyday. 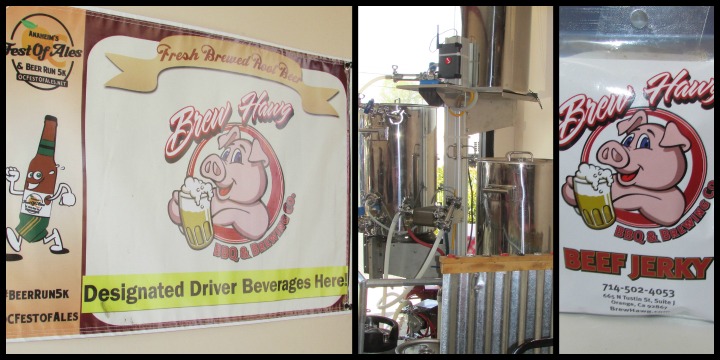 Besides smoking their own meat they also make their own Beer, Root Beer and Beef Jerky. I love root beer and their’s did not disappoint! It was bubbly and yummy and root beery. I also tried a bit of the Beef Jerky and it was amazing! Like nothing I have ever tasted before. So good….seriously…..hang on while I remember….yep….so good! 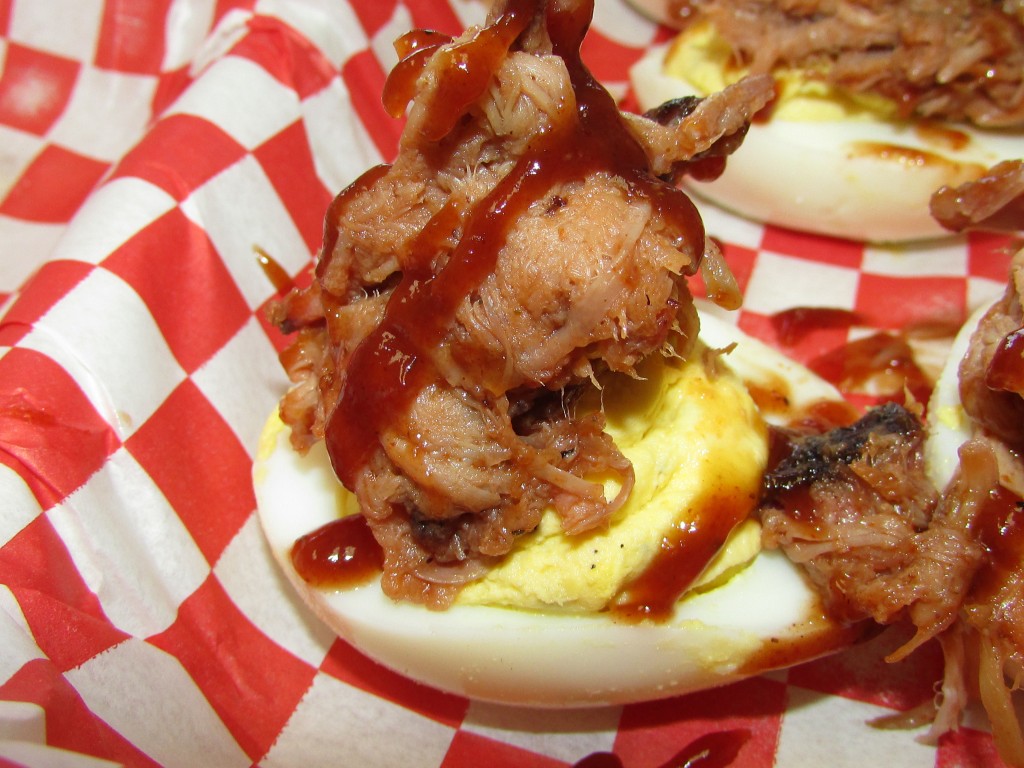 Now on to the food! I don’t know why someone hasn’t come up with this concoction before but it was one of the best things I have ever eaten! Deviled Eggs topped with Pulled Pork and Brew Hawgs own BBQ sauce. All I can say is AH-MAZ-ING! As a restaurant reviewer I typically only have a few bites of each item so I can taste as much as possible but I had 4 of these bad boys!!! I could not stop eating them. These are listed as appetizers but I could eat these as a meal. 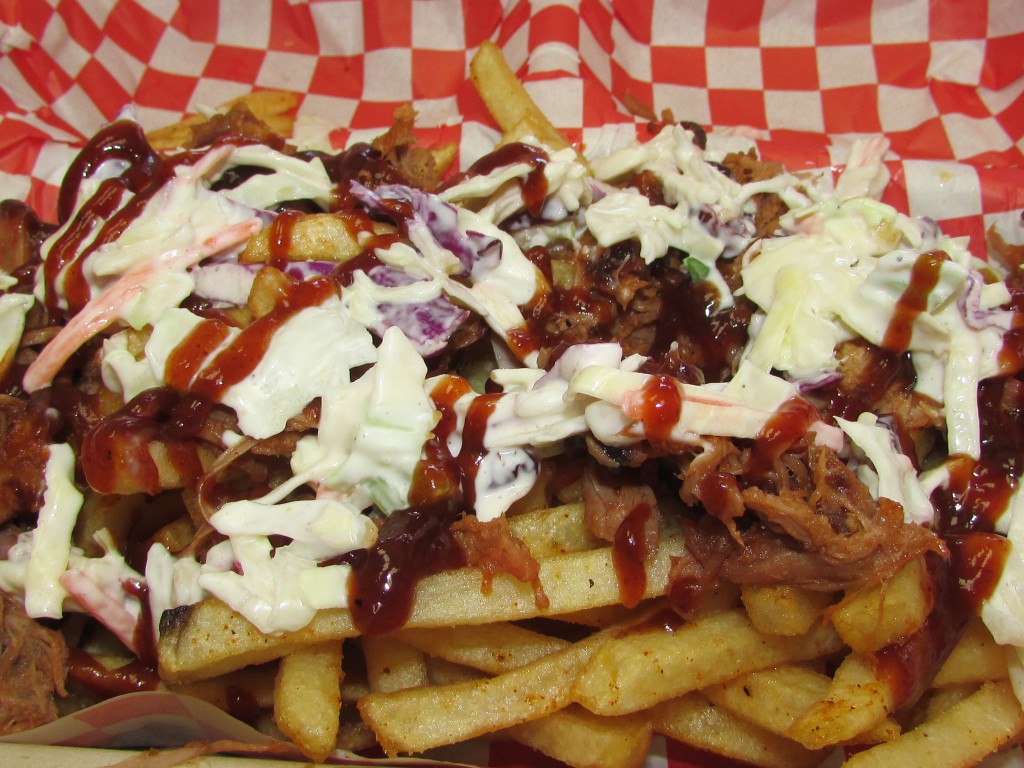 I had my daughter with me and she wanted some fries. So Leo didn’t bring us any ordinary fries. He brought us out some souped up fries! These were delicious! Pulled Pork, French Fries, BBQ sauce and Leo’s grandmothers coleslaw. This is the same recipe for Cole Slaw that his Grandmother, for 25 years, used to serve to the Ford Motor Company. 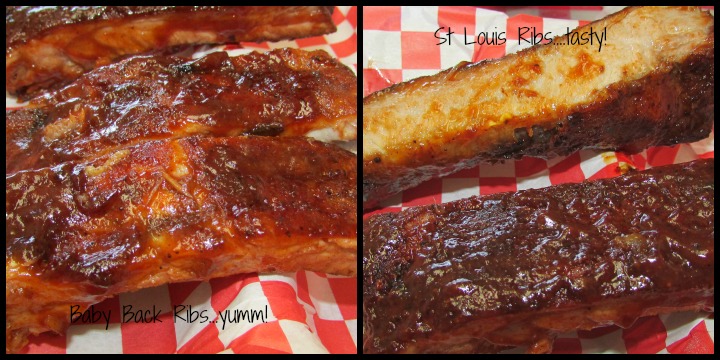 We sampled their ribs. The Baby Back ribs were fall off the bone good that was perfectly caramelized and the St Louis ribs were very meaty and tasty! 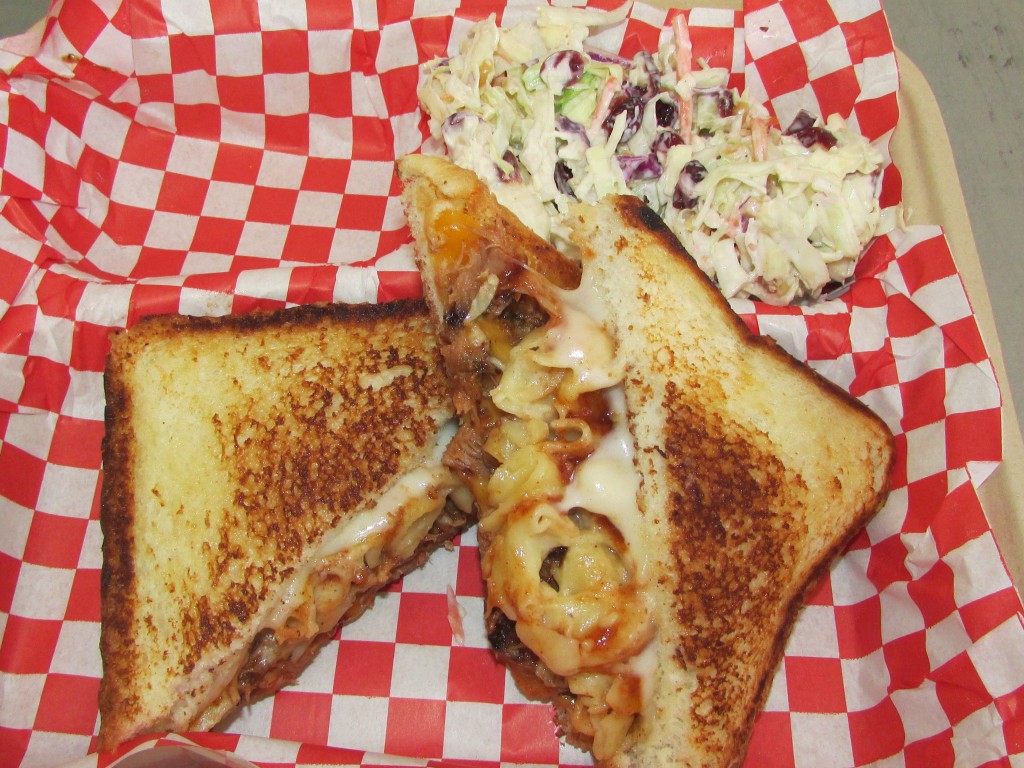 I was able to try several different sandwiches. This is one of their Skillet Sandwiches called “The Duke”. Its pulled pork, mac n cheese, BBQ sauce and melted cheese on grilled Texas toast. You would think a weird combination but it is so yummy!!!! 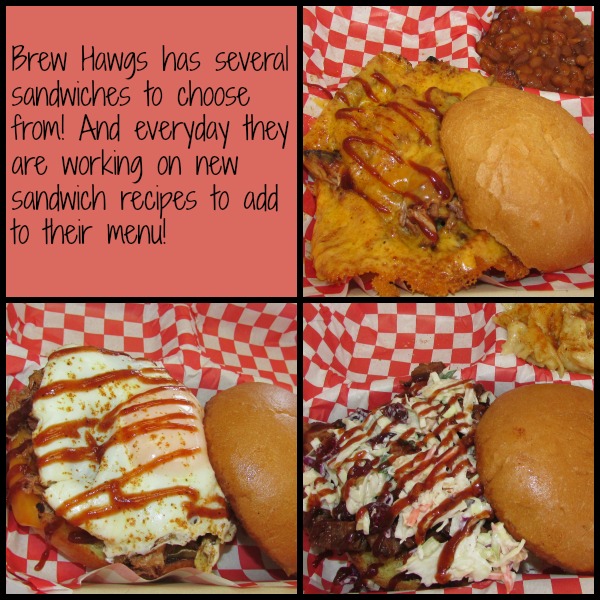 I also sampled several of their Standard Sandwiches. I tried their original Standard which is pulled pork, BBQ sauce and coleslaw on a toasted bun. The Skirt, which is pulled pork with melted cheddar cheese fried so that there is a “skirt” around the meat,  and The Knuckle which is a fried egg on top of pulled pork and cheddar cheese. It’s called The Knuckle because when you out the top bun onto the sandwich it breaks the egg and the yolk runs down over your knuckles. Every single one of these sandwiches I would order in a heartbeat they were that good! 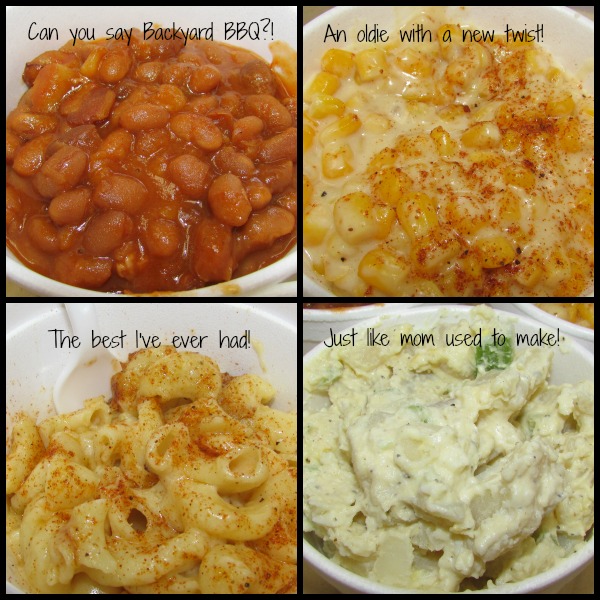 With every sandwich or entrée you get a side dish to choose from. They have Coleslaw, French Fries, Mac N Cheese, Baked Beans, Creamed Corn made with coconut milk instead of regular milk giving it a tropical taste and good ol’ Potato Salad. The potato salad is Leo’s mom’s recipe and no one in Leo’s family knows her secret ingredient to her recipe. It wasn’t until Leo opened up his restaurant that his mom finally told him what that secret ingredient was. 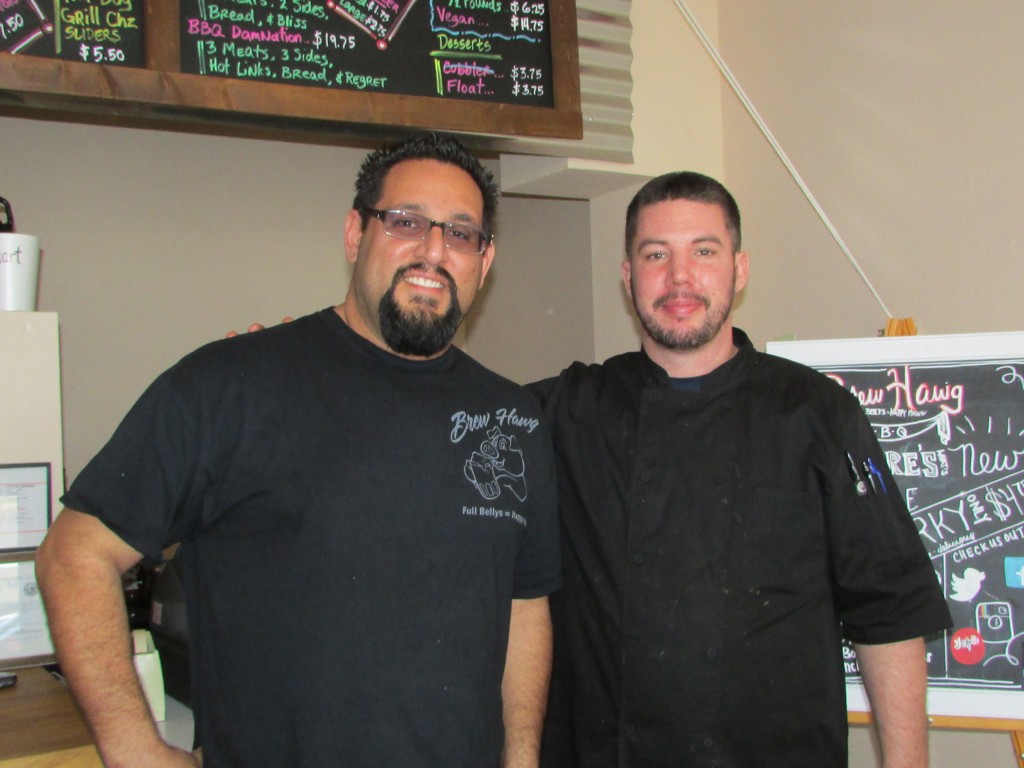 So if your ever in Orange stop on by Brew Hawgs on N Tustin St and see Leo (on the left) and Kelly (on the right). They will cook you up some good grub and leaving you feeling full, satisfied and best of all….wanting more! If you want to read about other BBQ restaurants in Orange County read about our last BBQ restaurant visit here.