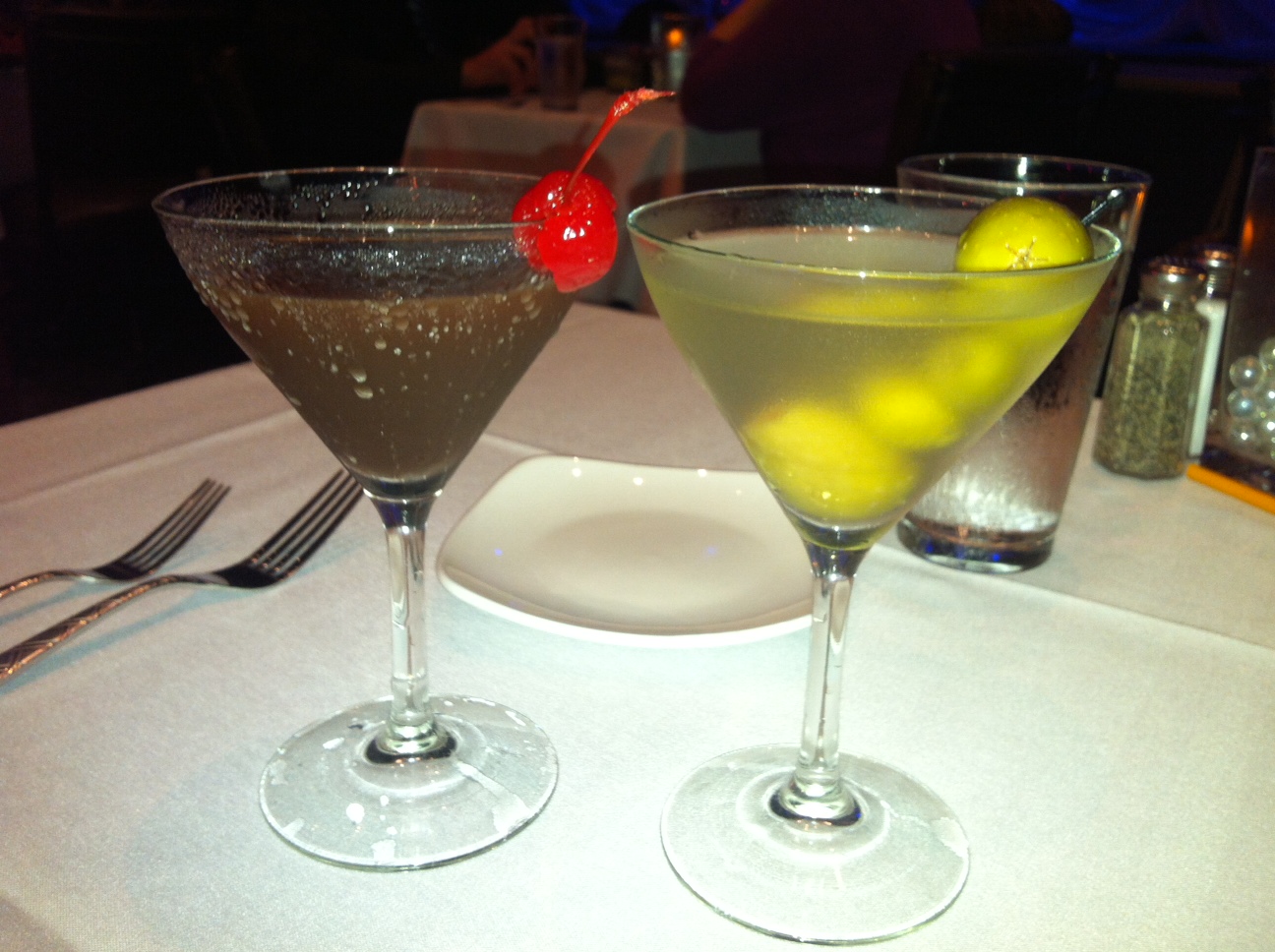 The Encore Dinner Theater graciously provided the dinner and the show. I was not compensated monetarily.  All  thoughts and opinions are my own. 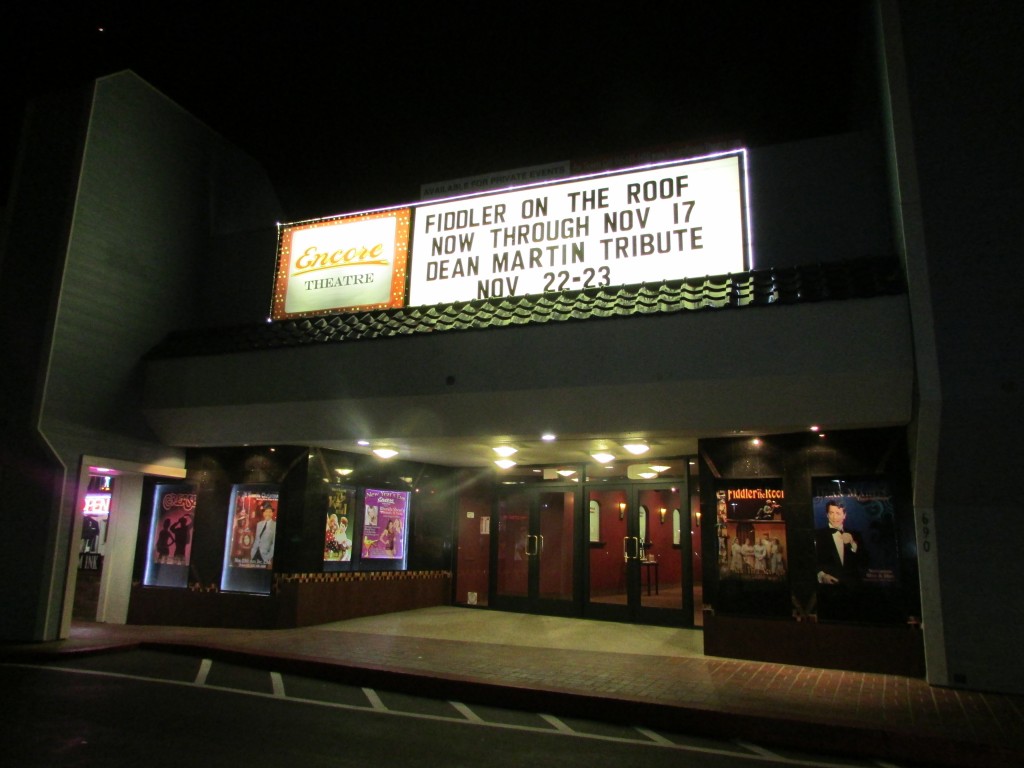 Melodi and I got the privilege of being asked see Fiddler on the Roof along with having dinner and drinks at the Encore Dinner Theater in Tustin. The Encore Theater opened a little less then a year ago taking over the space formerly occupied by The Curtain Call Dinner Theater. I was very excited to go as I have performed in the theater when it was the Curtain Call and couldn’t wait to see how it had changed (or stayed the same) 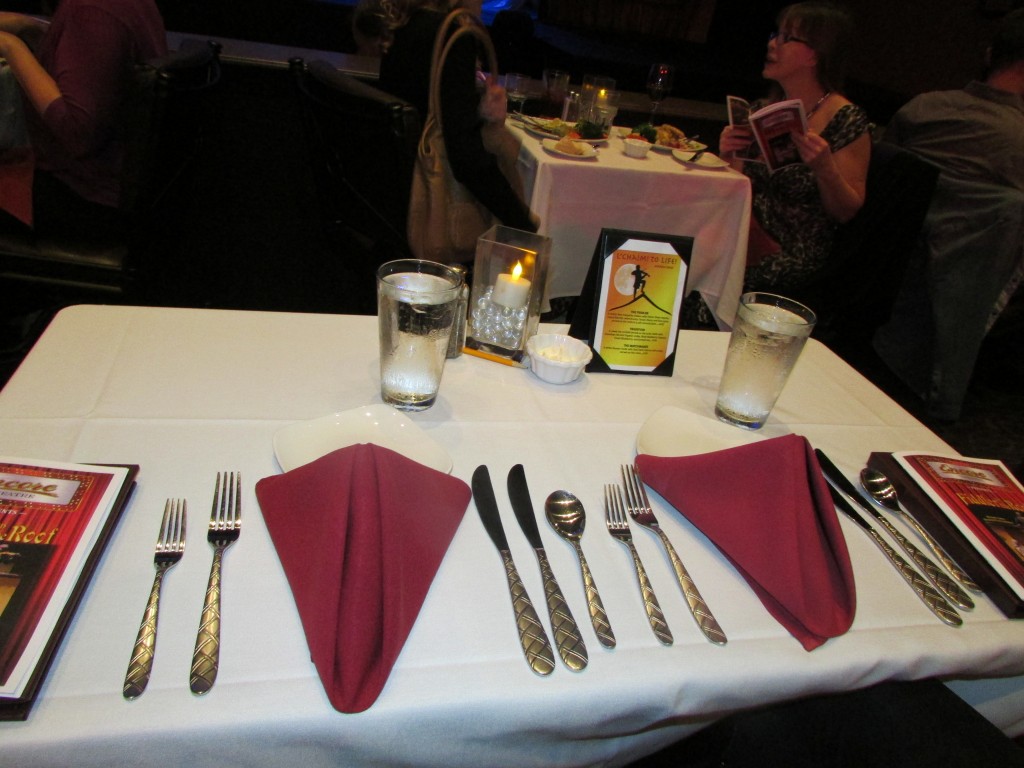 We arrived about 90 minutes before the show started so we could enjoy our meal. Included in the ticket price were a salad and entree. There were other items you could order for an additional charge such as appetizers, drinks and dessert. As we were ushered in to our table I noticed that most of the tables were full and the ambiance was warm and enticing. Our table was a booth made for 4 people but set for 2. Besides the utensils, napkins and water it included a dinner menu and a program for the nights performance of Fiddler on the roof. 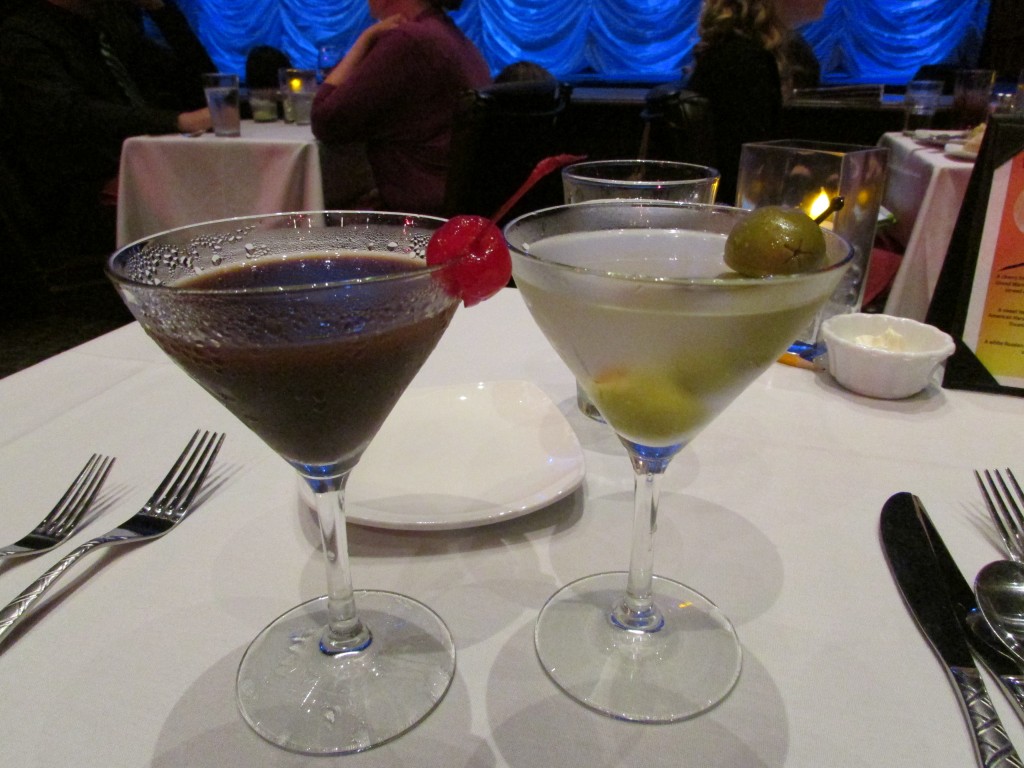 Our waitress Janice came over right away and got our drink order. They had a tent card on the table giving you a few choices of specialty drinks they created that went along with the show which I thought was a nice touch. I ended up ordering a Chocolatini and Melodi ordered a Dirty Martini with extra Olives. Janice let us know that the bartender was phenomenal and she was not kidding! My chocolattini was like biting into a piece of chocolate and Melodi said her Martini was just the way she liked it….dirty! 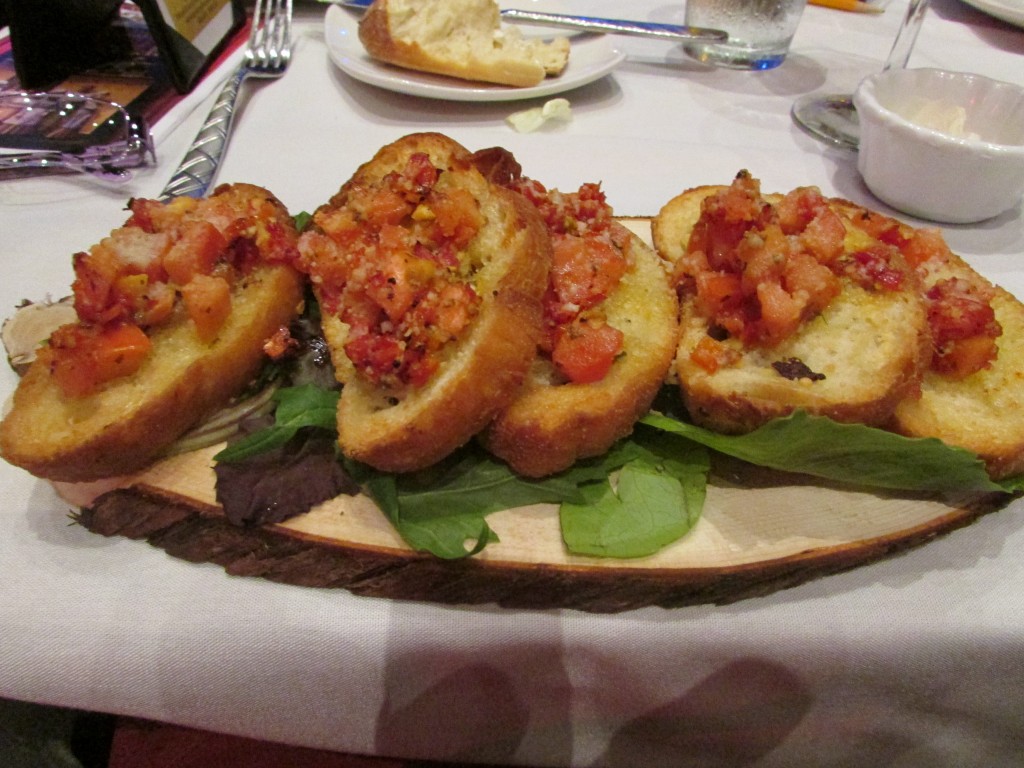 Then Janice took our food order. To start Melodi and I had appetizers. I ordered the Bruschetta. My Bruchetta was served on a piece of wood cut directly from the tree. The pieces of bread were perfectly toasted with the seasoned tomatoes and cheese sprinkled on top. They were laying on a bed of basil so you got just a hint of basil in each bite. It was some of the best bruschetta I have ever tasted! 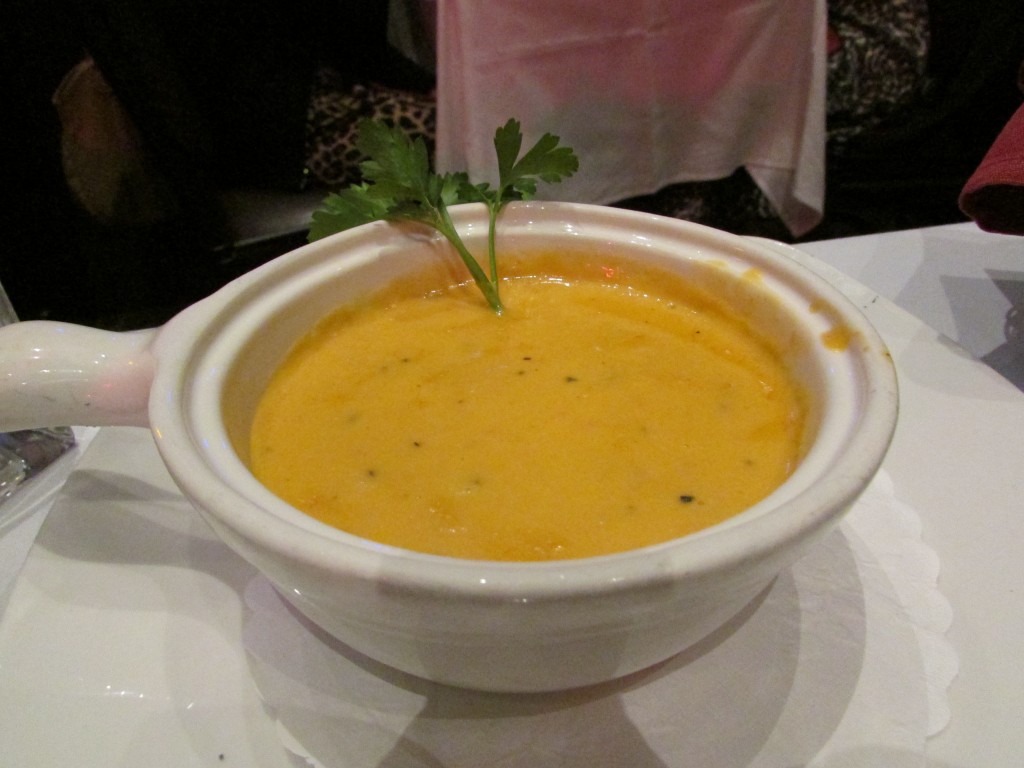 Melodi ordered Lobster Bisque which smelled FANTASTIC! She said it was amazing and gobbled it up faster then you could say Encore! 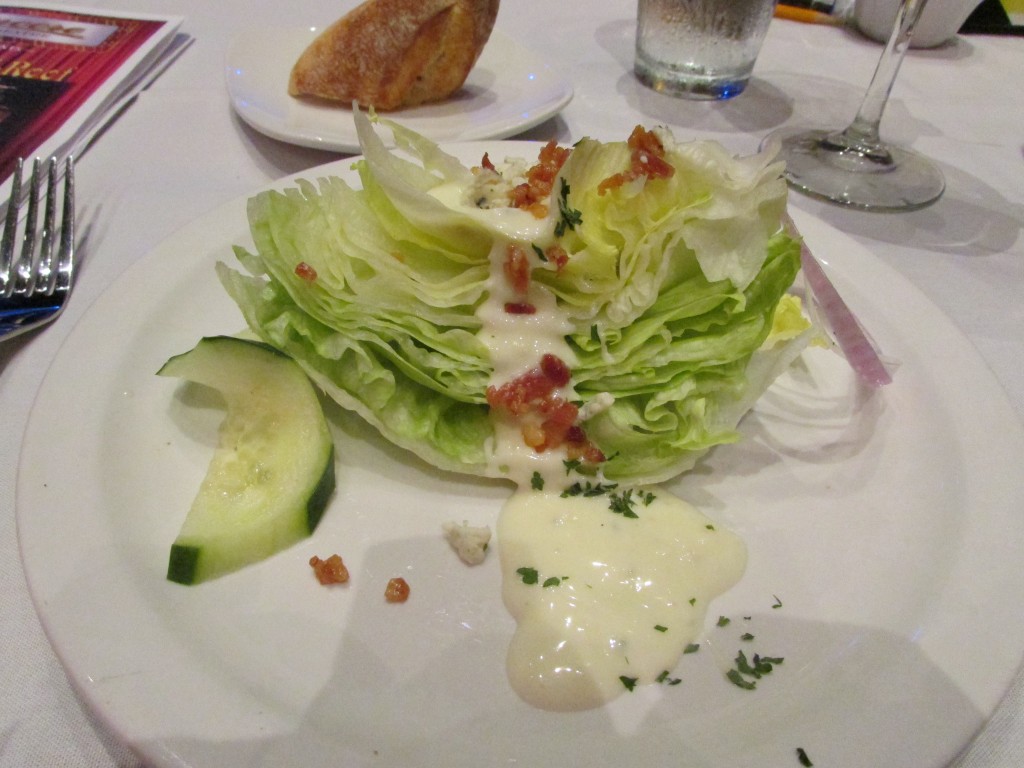 Salad came next. I chose the Wedge Salad with cucumber, onions and bacon topped with a blue cheese dressing. It was cold, crisp and had just the right amount of dressing. 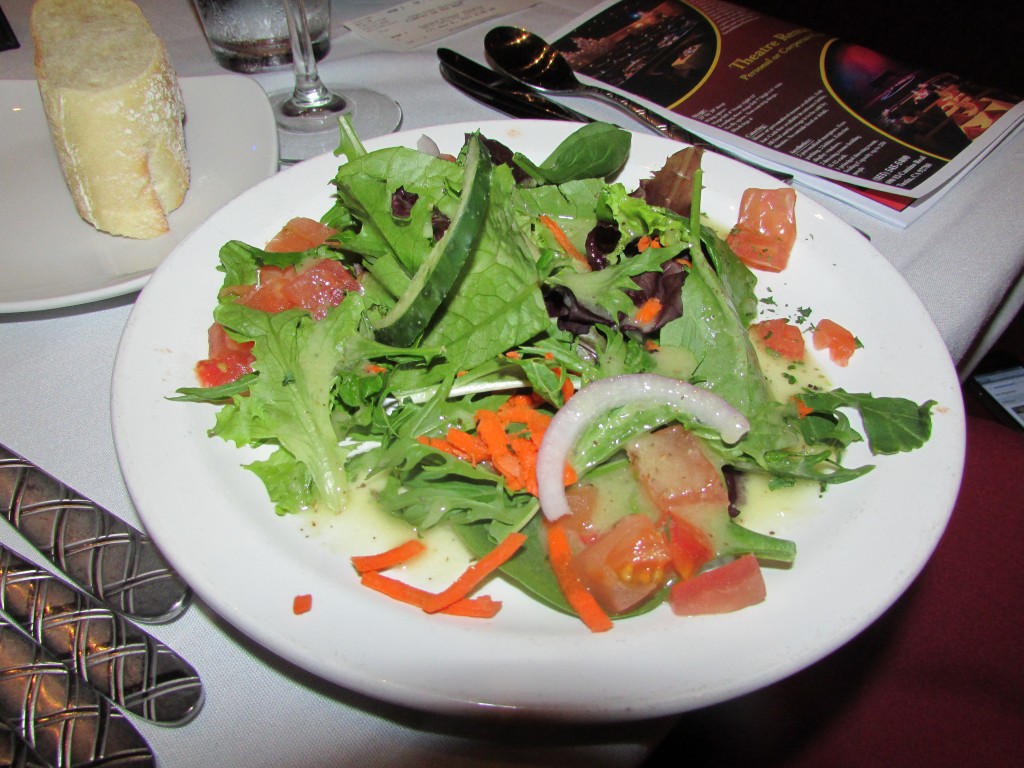 Melodi ordered the House Spring Mix Salad. Her salad was also delicious with just the right amount of dressing and the spring mix was bright green with bursts of red and orange coming from the fresh tomatoes and carrots. 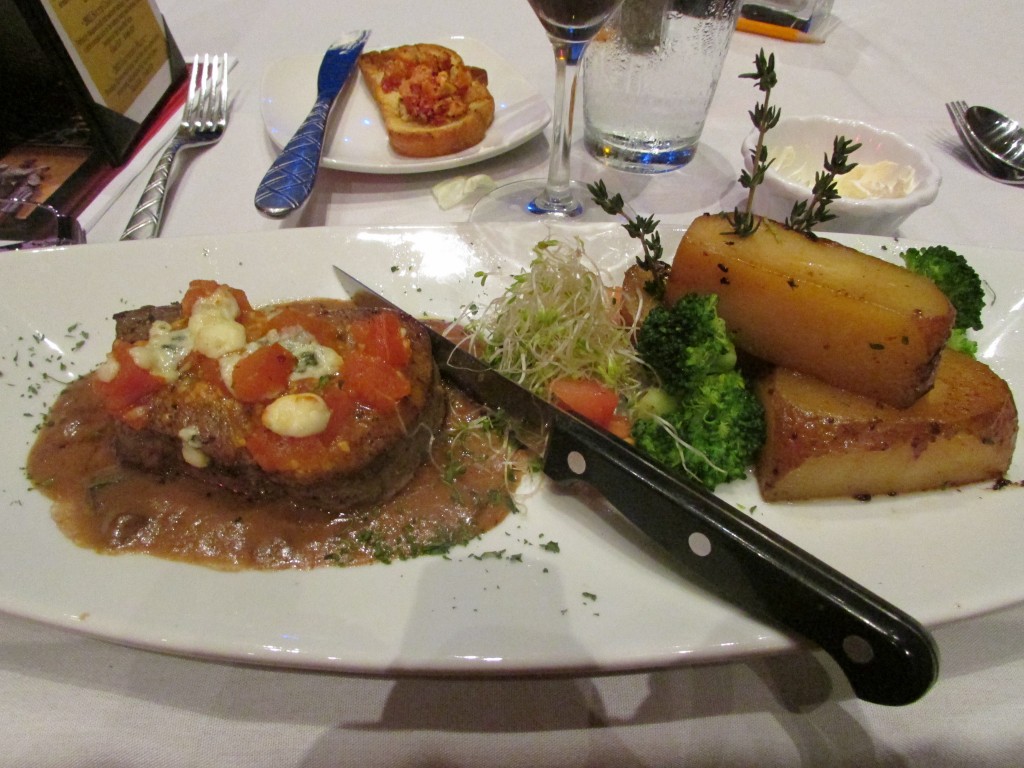 For the entree Melodi and I ordered the same item. We both ordered the USDA Choice pan seared Filet Mignon topped with roasted garlic, tomato Gorgonzola crust and a portebello mushroom sauce which is an upgrade to the ticket price. I ordered mine medium rare and Melodi ordered hers medium. Both entrees were cooked to perfection for each of us. The sides included pommes pont neuf confits (large cut potatoes) and veggies. Everything was piping hot and absolutely divine! 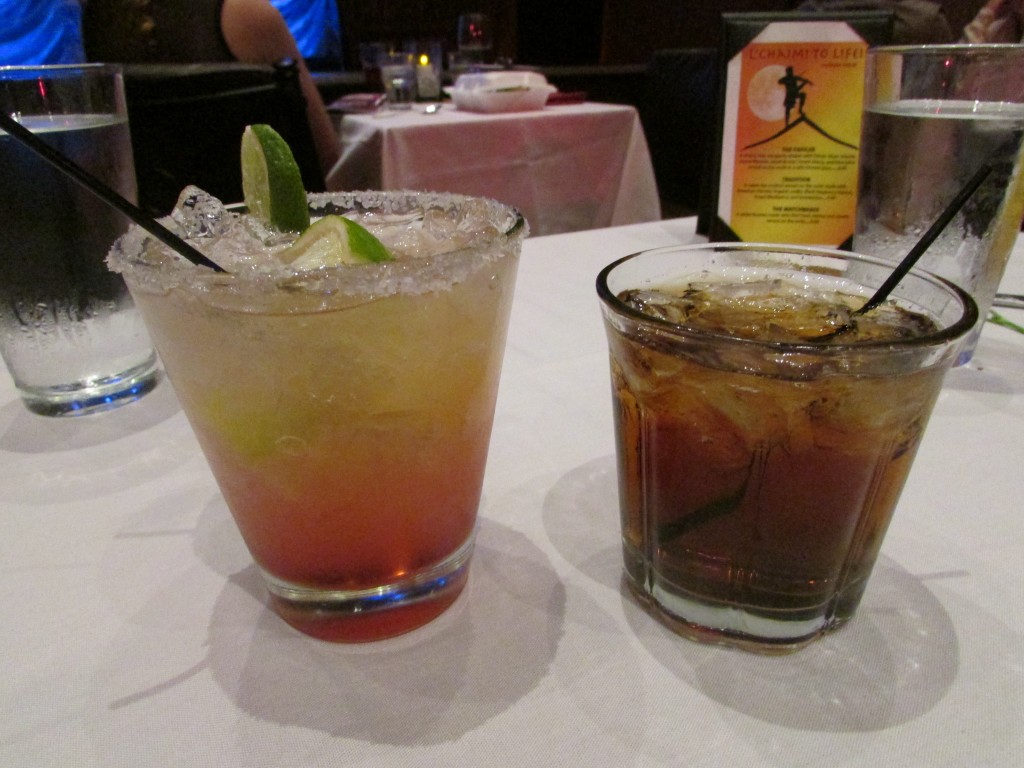 Janice then came and took our final drink order and our dessert order. (which would be served at the first intermission) I ordered The Fiddler which was a cherry, lime margarita and Melodi ordered a Jack and Coke. 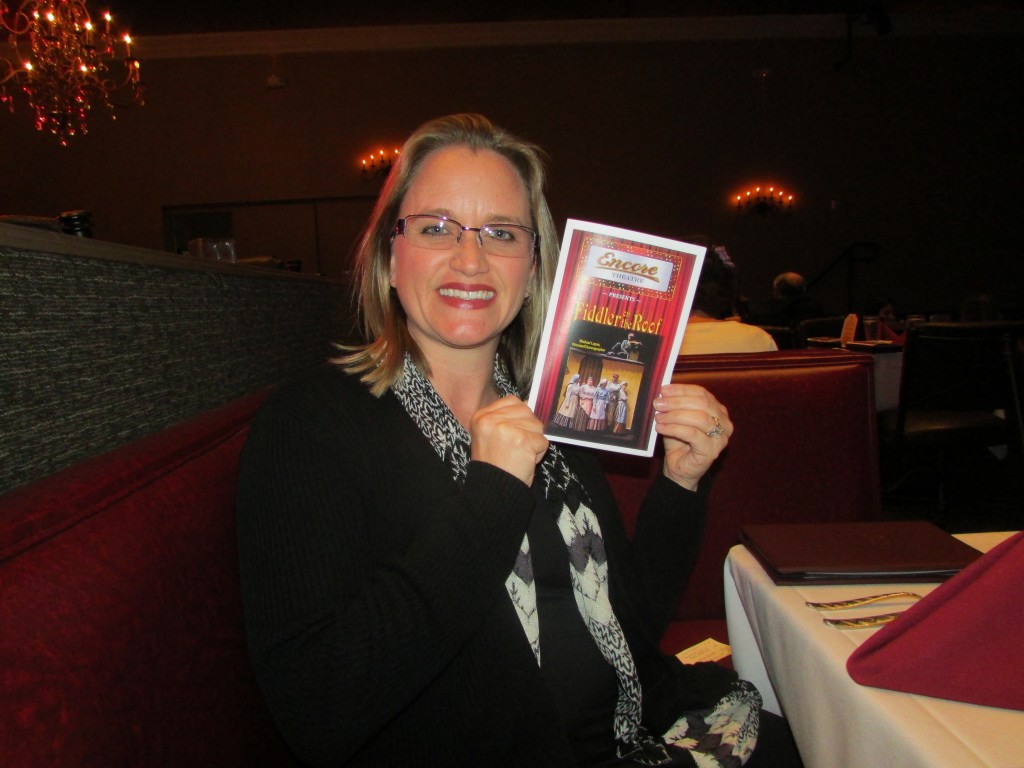 The show started right on time and it was fantastic! The cast was superb and the singing was pitch perfect! 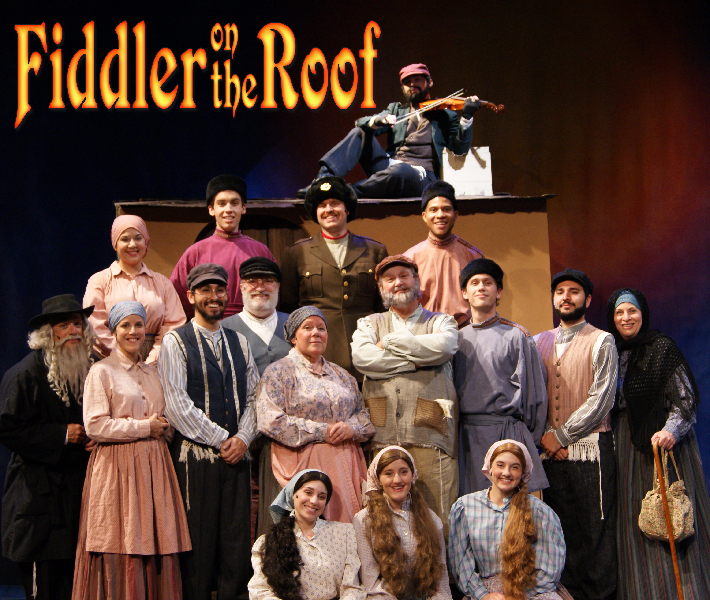 This show will have you laughing, crying and singing along for the entire 2 1/2 hour performance which includes 2 intermissions. 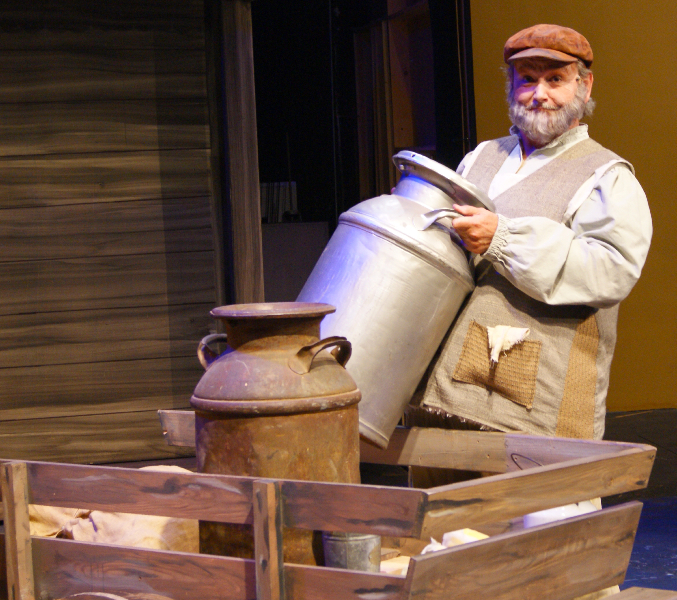 Cliff Senior plays the lead Tevye. The story centers on Tevye, the father of 3 daughters, and his attempts to maintain his family and Jewish religious traditions while outside influences encroach upon their lives. It is set in Tsarist Russia in 1905. 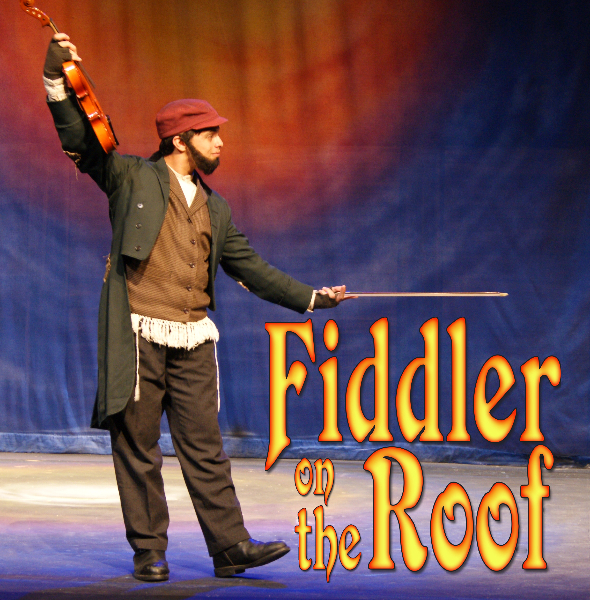 The Fiddler is a metaphor for survival, through tradition and joyfulness, in a life of uncertainty and imbalance. Usually at some point in our lives, we all feel this and that is why this show resonates with so many people! 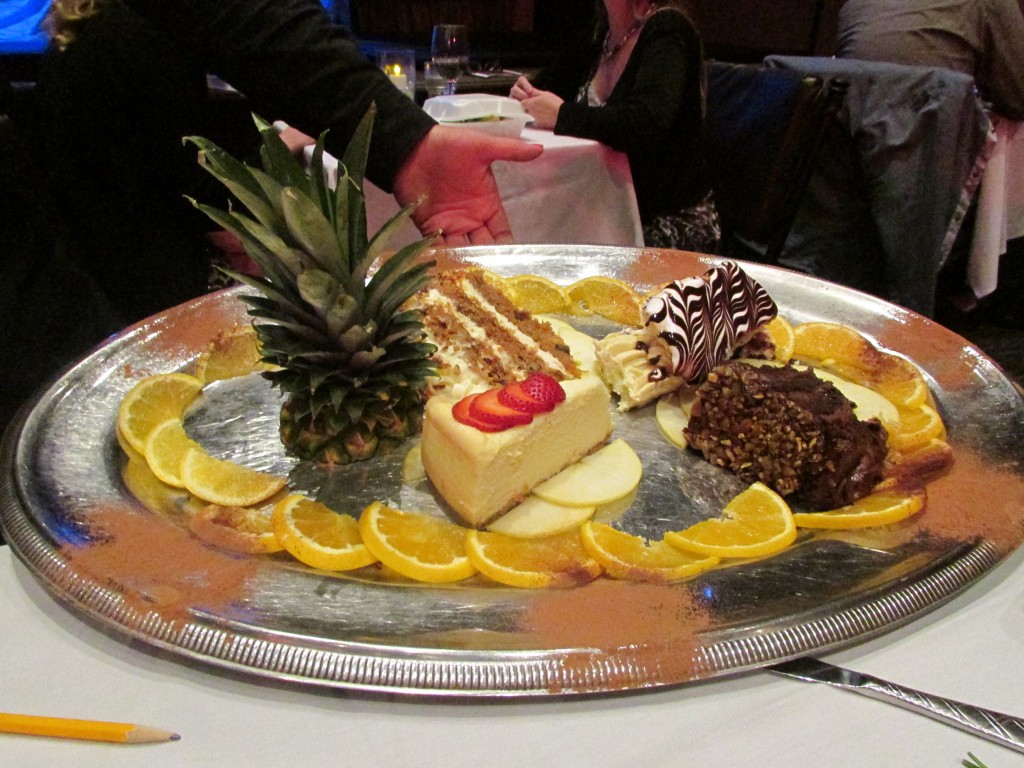 During the first intermission our dessert came! We had lots to chose from! Worlds Best Carrot Cake, 1000 Chocolate Chip  Chocolate Cake, Classic New York Cheesecake and The Chefs “Special” Dessert. 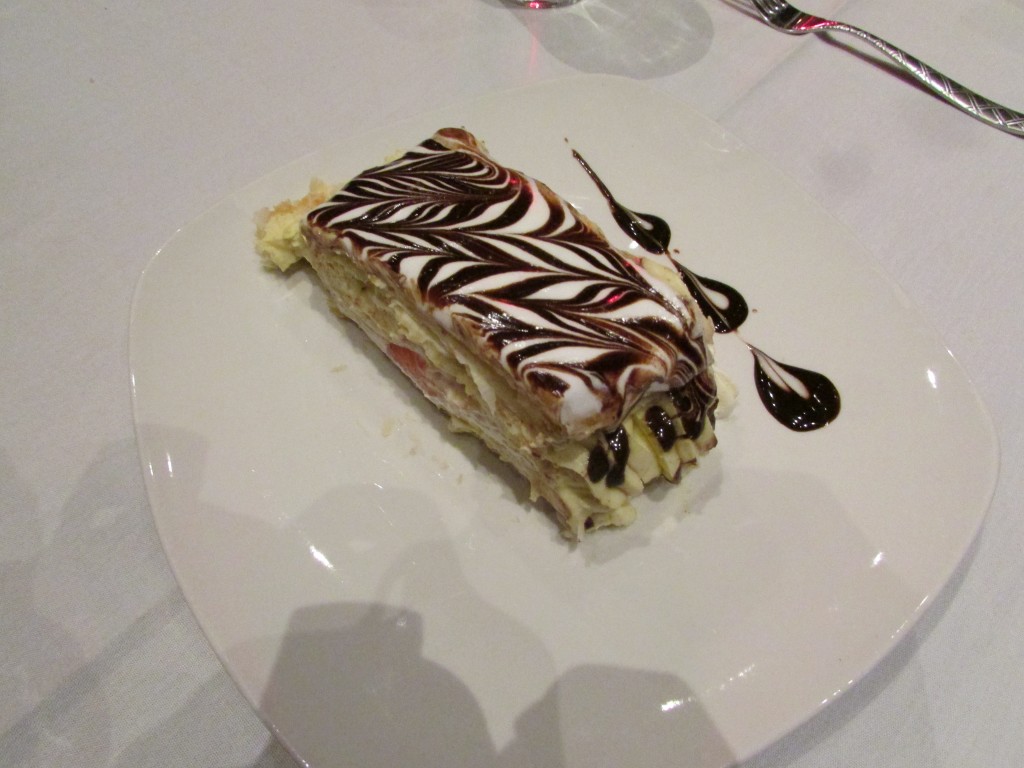 I got the Chefs Special which was a cream and strawberry filled philo dough covered in chocolate syrup and cream. It was light and airy and pretty tasty! 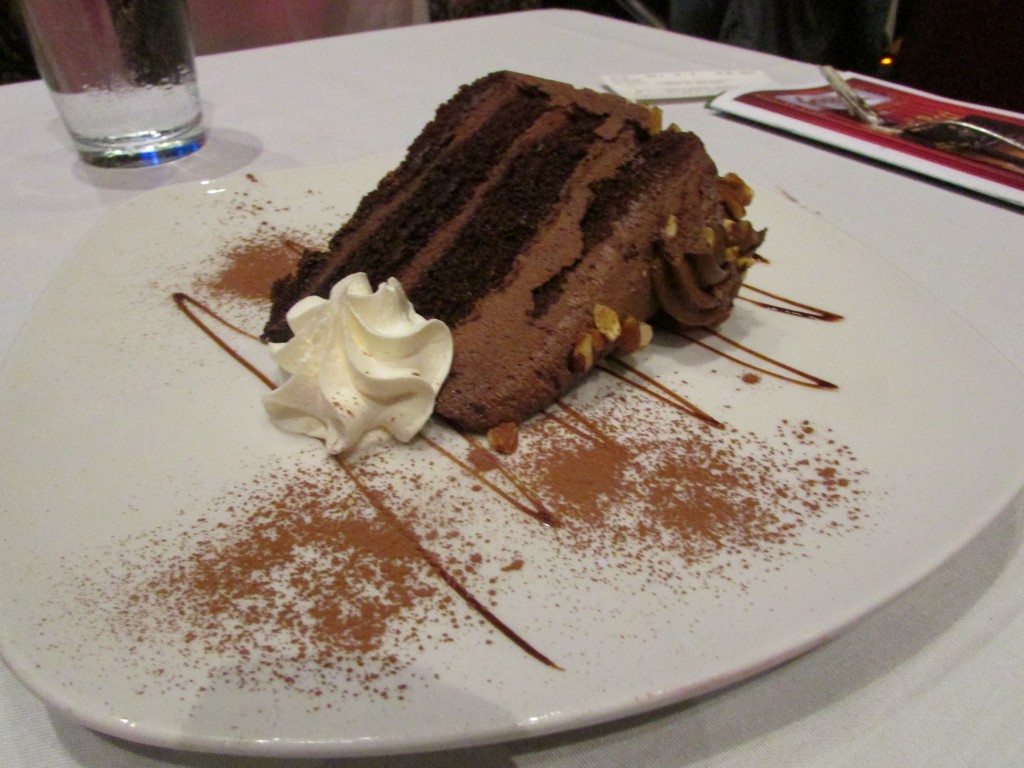 Melodi got the 1000 Chocolate Chip chocolate Cake. It was beautifully plated and topped with walnuts. I tasted it and I found it tasted just like ordinary chocolate cake. During dessert Peter Zappas, the owner, stopped by our table to see how we liked the show so far. He is a common fixture in the theater and you can spot him at the shows several times a week! 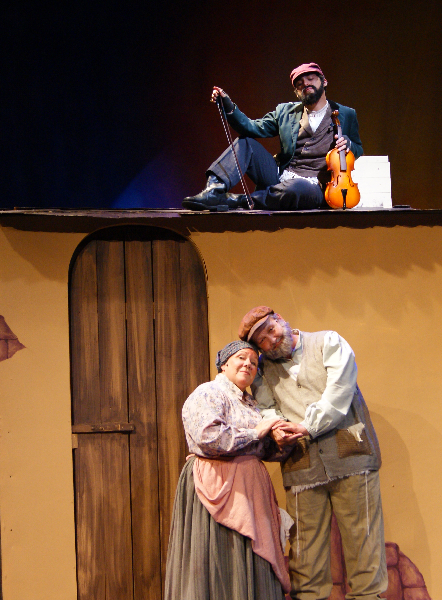 My favorite part of the show was during the 3rd act where Tavye and his wife Golde, who have been married for 25 years sing “Do You Love Me”. I was so moved by this part of the show that I teared up a bit. 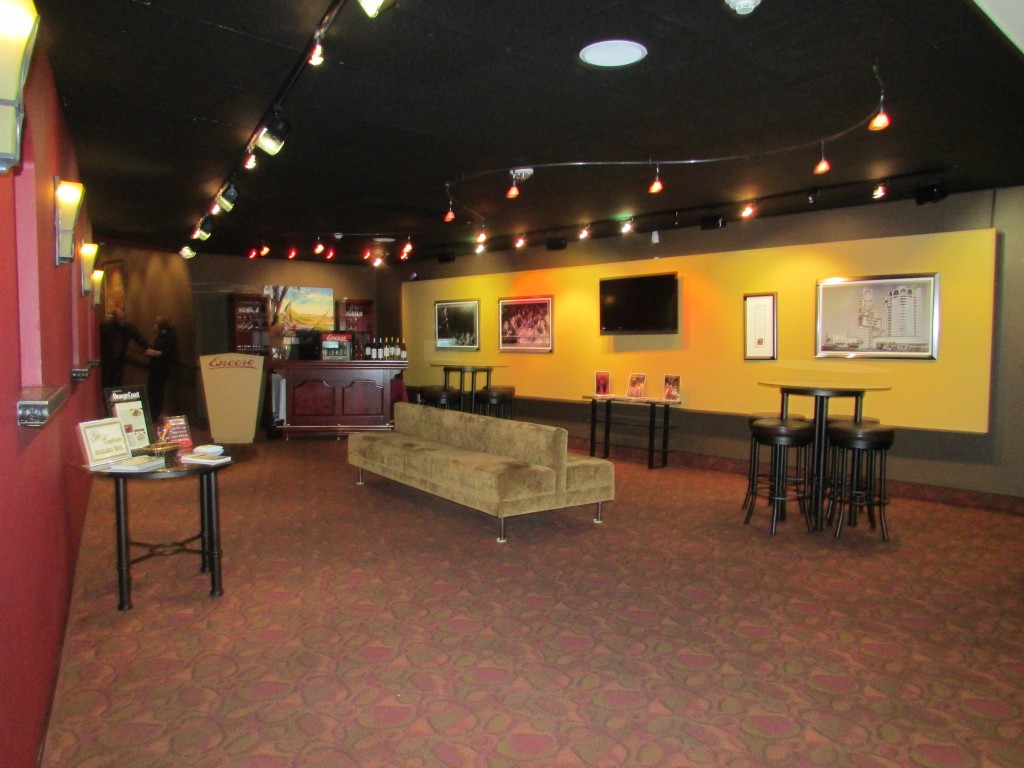 The Encore Theater has been renovated since it was the Curtain Call. The 2 lobby’s provide adequate waiting area until it is time to be seated in the theater. 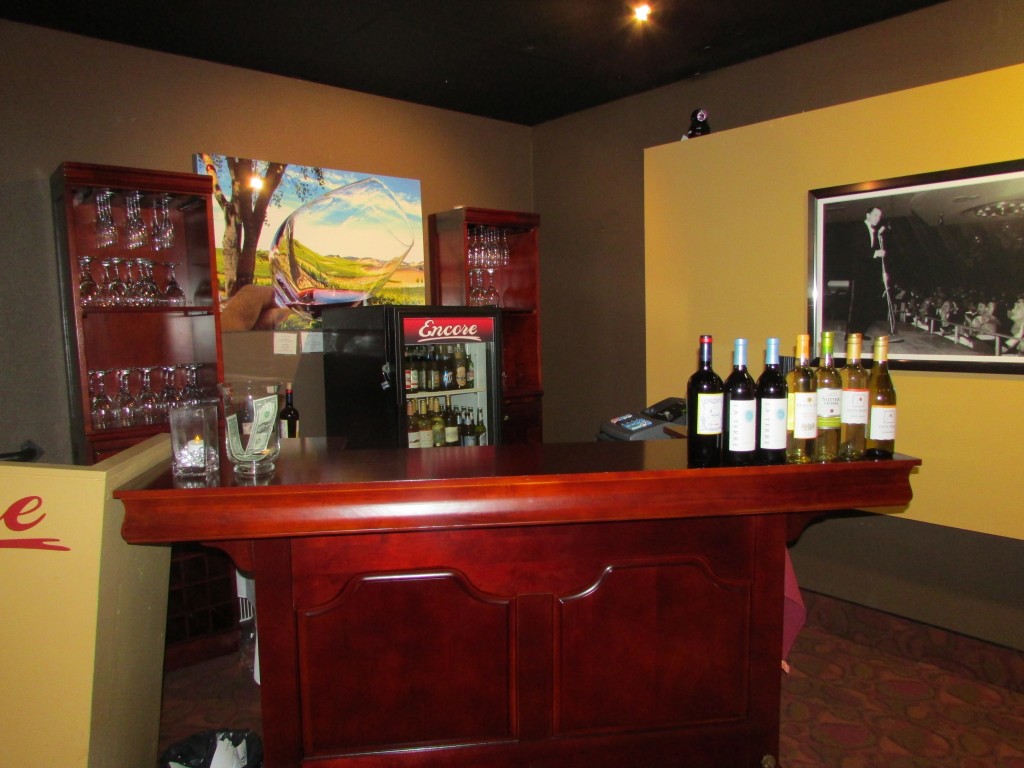 The 1st lobby has a beverage area where you can purchase drinks while you wait to be seated. 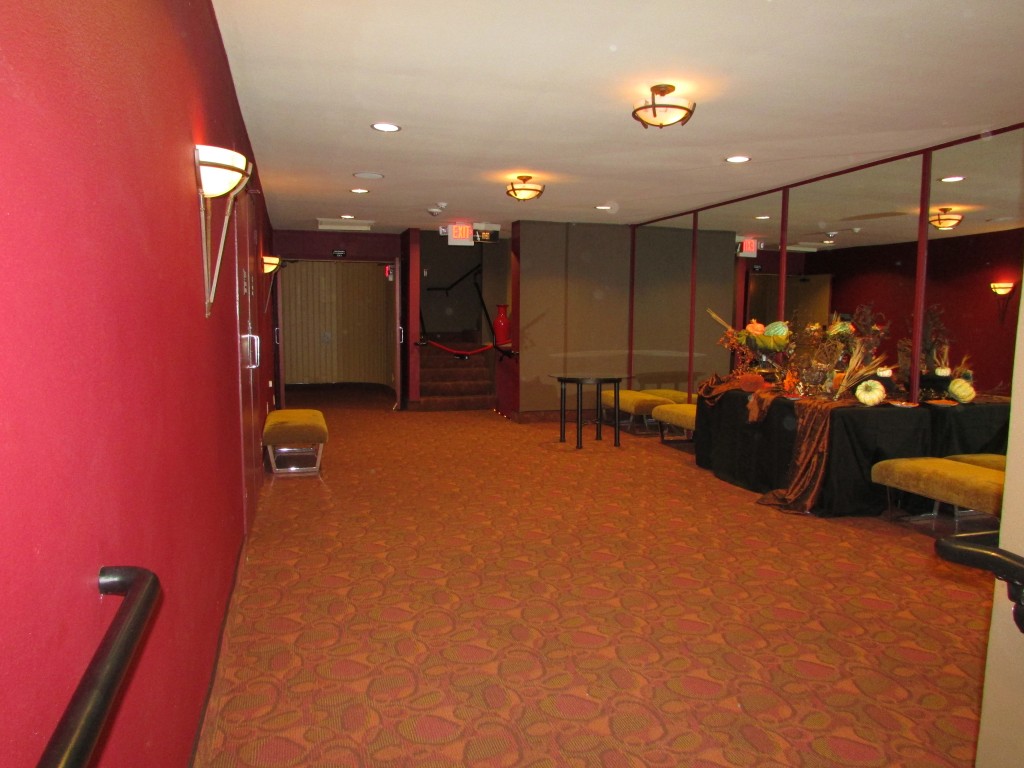 The 2nd lobby was festively decorated for fall. 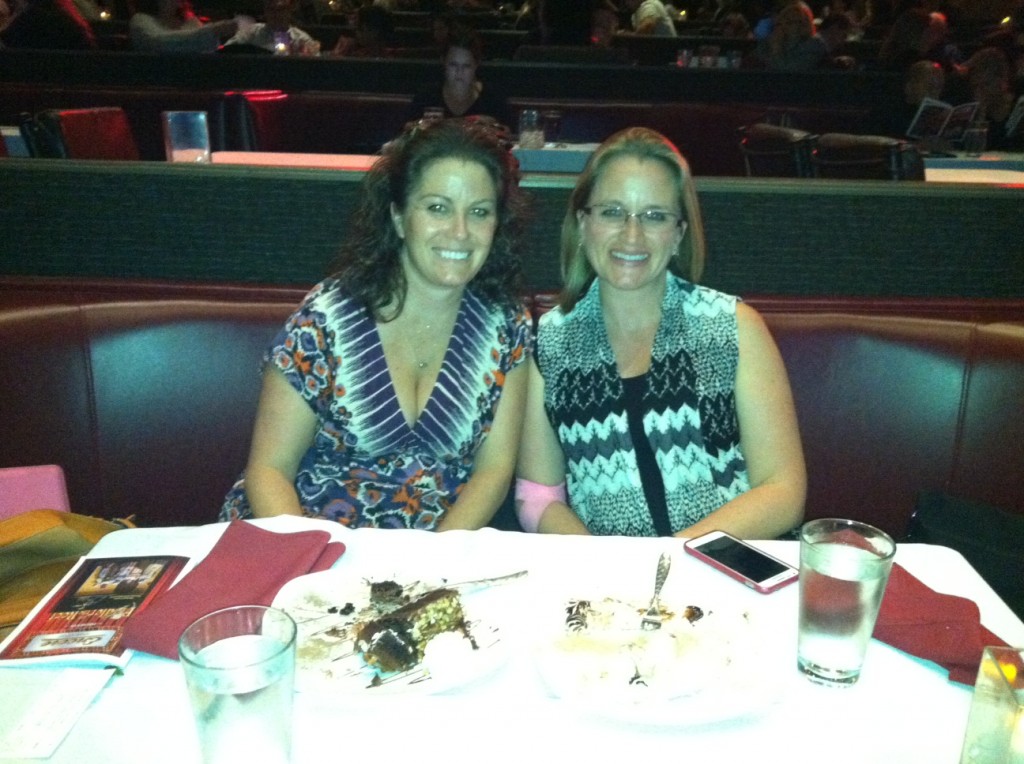 All in all I was very impressed with the new theater. It was still reminiscent of the old theaters that inhabited that space in the past but it was now modern and quite comfortable. Before the evening was even through we were already talking about coming back! Go see a show and be sure to say Hi to Peter if you see him!