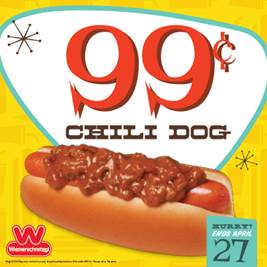 If you are looking for a delicious snack after school, after work, or after sports, hop on over to Weinerschnitzel for a 99 cent chili dog!

Wienerschnitzel, the world’s largest hot dog chain, is cutting back the price of their famous Chili Dogs, to just 99 cents for limited time only! Back by popular demand for the fourth year, this tasty deal is available at participating locations through April 27

The guest-favorite Chili Dog, which made its debut on the original menu in 1961, is a grilled hot dog smothered with Wienerschnitzel’s signature chili (a recipe so secret it’s locked up in a vault) and served in a soft, steamed hot dog bun. Chili Dog-lovers are encouraged to hurry into their nearest location starting March 31, to take advantage of this tasty deal!