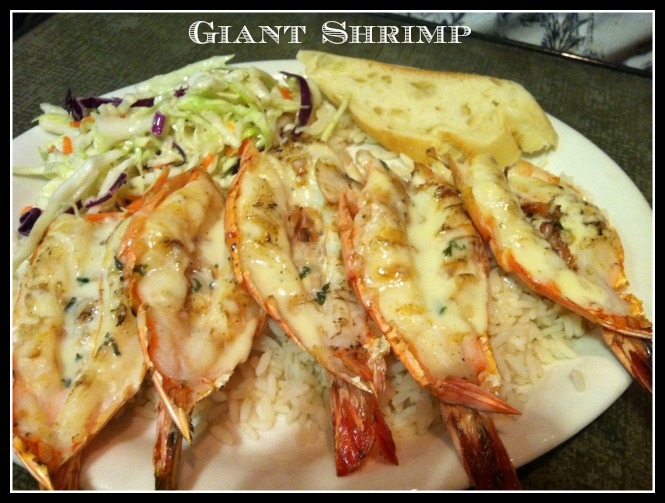 Let me start of by saying that as someone who dines out frequently and tries a variety of food,  California Fish Grill is by far the best value in Orange County when it comes to fast casual restaurants. My brother took me here last week on a reprieve from visiting my father in the hospital. We were looking for a quick bite where we could also have a drink.

Before entering I noticed they have a cute patio with bar stools facing the street as well as tables and chairs alongside the railing. When you walk in  you grab a menu and place your order at the counter. I found that the guys working were very friendly and had lots of great suggestions. On this particular night I felt like trying something different than salmon so my brother suggested I order the white fish (swai) platter with the garlic butter sauce. It comes with coleslaw, fries and bread. He ordered the giant shrimp, a garden salad and we each got a glass of wine as well as dessert. No kidding, our total was under $39 for all of that. The Swai was only $8.99 and the shrimp was only $13.99. I’ve paid twice as much at other restaurants for fish & chips that wasn’t nearly the quality served here!  This place is clean & has nothing to hide as you can look in the kitchen where the food is being prepared fresh!

Then my brother told me about the glorious Tartar Sauce Bar. OMG. I love tartar sauce. I could eat it with everything. They have an amazing house tartar sauce that pairs really well with their french fries.

When our food came The Swai was tender, flaky and buttery. And oh how delicious the sauce was.

My brothers shrimp was also amazing. They give you 5 giant butterflied shrimp and they come right out of their tails. You can order it with fries or rice and he chose rice which complimented the flavor of the shrimp. I took my small slice of bread and wiped my plate clean with it. I wish they gave you more bread for that exact reason.

Truth be told this is my new favorite restaurant right now. I actually returned there by myself 2 days later because I was craving it so badly. (I was coming back from the hospital and it beats cafeteria food). Now that I have written this I want to go back again. I was not a huge fish lover but now I can’t seem to get enough of it. Thanks CA Fish Grill!

CA Fish Grill has 8 locations to serve you. We dined at The Lake Forest location and it was rated  4.5 out of 5 stars on yelp. Doesn’t get much better than that!